Posted in Social Media
by Posted on

Messaging is at the core of Facebook’s future according to CEO Mark Zuckerberg, who recently announced that the company is looking to build “a privacy-focused messaging and social networking platform” where people can communicate more privately and securely.

Notice how messaging takes the centre stage here? Although you can already see that Facebook is focussed on messaging with its acquisition of whatsapp a few years back. Whatsapp has become an integral part of our lives. I have seen Facebook testing messaging on ads through both Whatsapp business and Messenger.

I am  testing these to see how effective they are and will fee this back.

Essentially, this doubles down on another of Facebook’s recent announcements – the social networking giant is working to integrate Messenger, Instagram, and WhatsApp, another move where messaging stands at the heart of Facebook’s future.

Here is a quick breakdown of Mark Zuckerberg’s announcement, and why messaging will play a key part in your marketing.

Zuckerberg explained that “private messaging, ephemeral stories, and small groups are by far the fastest growing areas of online communication.”

People like Messenger, we use messaging apps these days more than we do open social networks, we prefer private messages to public posts, and more people are jumping onto messaging each day.

Private messaging is more intimate than other communication options. It allows for personalised, one-on-one conversations, a communication trend. And when privacy is the focus on an instant messaging system, it can also alleviate fears of privacy intrusions (historically a challenge for Facebook).

Facebook will be shifting toward private and encryption-protected messaging options, which people prefer.

As a marketer, I have seen the massive effect of taking advantage of Whatsapp and being aware of these changes to Facebook Messenger marketing means you’ll be where people want you to be, and speaking their language.

Facebook’s leadership is clearly prioritising better messaging, and from the history of the past 2 years, with whatsapp acquired, we may see a shift into Facebook messenger.

Businesses’ Reach on Messaging Apps Is Poised to Explode

As noted, back in January, we learned about the a merger, in which Facebook plans to integrate its three messaging services into a unified communications platform.

The ability for marketers to reach customers across platforms through a single chat marketing platform will be pretty massive and it’s on the go. For example, you’ll no longer have to maintain a separate presence on each service – instead, you’ll be able to reach users on all three platforms from one management platform.

If you want to know what the future of social networking looks like, this announcement from Mark Zuckerberg is a great clue. As Facebook is dedicating more time, energy, and resources to messaging, you can too.

Fire up your Facebook Messenger & Business Whatsapp marketing campaigns today, ensuring your marketing efforts meet expectations and that you can communicate with customers where they want, when they want, and how they want. 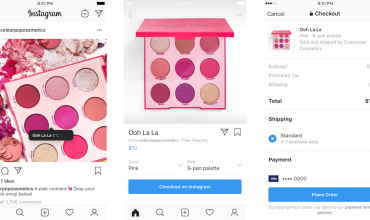 Posted in PresentationSocial Media
So Instagram is now moving towards eCommerce properly. It is now evolving its various tools to better facilitate on-platform shopping.…
by Posted on
Posted in Social MediaTrainingWeekly Blogs
Whatsapp BusinessI have been banging the drum about Whatsapp replacing email for quite some time now. However there was always…
by Posted on